Book Review: Power Grid Down: How to Prepare, Survive & Thrive After the Lights Go Out

I have had the honor and privilege to know Tara Dodrill for quite some time – first from afar via social media networks, emails and telephone conversations, and most recently - in person.  The one thing I can truly attest to is Tara has a passion for education; evidenced by her frequent write-ups in such notable digital periodicals as Yahoo News, USA Today, The Inquisitr, and Prepper and Shooter Magazine on topics of GMOs and Monsanto, Second Amendment Rights, the decline of our Country and Government, Disaster Preparedness, and the Fragility of Our Country’s Infrastructure.

This author’s new book “Power Grid Down: How to Prepare, Survival & Thrive After the Lights Go Out” is long over due.  She has written so much over the years on our Country’s power grid vulnerabilities that it was only a matter of time before she shared all her vast knowledge and research more deeply on how we all can protect ourselves before, during and after some catastrophic event takes down our power grid. 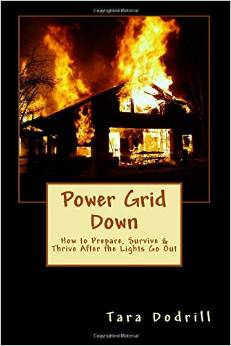 “Power Grid Down” brings the realization that people will likely die should our nation experience a grid down scenario due to most being unprepared.  Think about this.  We are all interconnected in some way or another via the power grid – computers run just about everything and anything – literally.  Grocery stores are on an automated replenishing system via a network of computers around the country - which means as one item is purchased another is ordered and ultimately delivered.  If the grid goes down- so too will this system.  What this means to us is, if there is no replenishing of goods for the stores, there are no deliveries.  Inevitably, there be a run on all the stores leaving only empty shelves behind.  How could this happen?  Unfortunately, all too easily, unlike most “apocalyptic disaster scenarios” a power grid failure can be caused by a number of factors – by a terrorist cyber-attack or even a terrorist EMP attack – and naturally by a massive solar storm.

The author begins her book by doing what she does best – she educates you on the possibilities of how a power grid failure and/or collapse can occur in our country; revealing little known facts and examples of past failures and attacks to our grid.  As an example, she discusses how a smart car or cars can be used to take down the grid or how the Emergency Alert System can be tapped into to create a failure – a lot of these examples were news to me!

Not only does "Power Grid Down" educate you on the power grid but this book also addresses what you can do before a failure occurs; giving you the necessary information on what you can do and how to do it, to ready your home, property and family should such an event happen.

In summary:  If you happen to be one of the “oblivious to what is happening around them” or believe that if something catastrophic does happen the government will be there to care for you; hopefully after reading “Power Grid Down” you will have a better understanding of the importance of preparing and why.   If you are a “seasoned” preparedness-minded person, you may want to refresh your memory of how vulnerable our infrastructure is or like me learn ever more by reading Power Grid Down.

Tara Dodrill  is currently a writer at Off The Grid News, Advertising Director at Prepper and Shooter Magazine