It was amazing to me how many people began to take precautions; preppers and non-preppers alike, way in advance of the arrival of September 2015. In fact, it appeared to be on par with the likes of, well … Y2K and the end of the Mayan Calendar (December 21, 2012).  Reports began to circulate about long-term food storage companies running out of stock, sales for survival stores and gear increased; as did the sale of ammunition, and surplus stores were being overrun by people grabbing up all-things-preparedness  they could get their hands.  Why?  Because we were told that “the end of the world as we know it” was going to occur in the month of September 2015.

People, who I have considered very reputable in the past; you know, the “in-the-know” sort of people who have people working for them, or in association with them, that do all the leg-work, fact gathering, investigations, and source interviews; were all talking about Government attacks on U.S. citizens, martial law, civil unrest, gun confiscation, Russian or other foreign countries attacking our homeland, a stock market crash and, yes even meteors or asteroids creating tsunamis and earthquakes.  You could actually feel it in the air.  “Something” - not so good - was going to happen in September.  But what?  That was anyone’s guess. 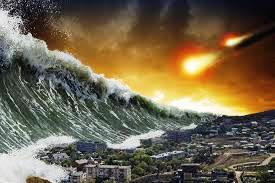 Was it because there was so much “hype” that these events and others did not happen?  I mean, if someone or something was planning a surprise event – it wouldn’t be a surprise if everyone in the whole world knew about it right?  Could social media and alternative media have had that much influence over any of these events?  I don’t know.  Do we instead chalk it up to “mass-hysteria” where one person tells another person and … well like the childhood game we played where one child is given a phrase and whispers it into the ear of another child and it continues around a circle until the last person states out loud the phrase - and it is nowhere near what the original phrase was?  Did this happen?  Did something that “could” have happen get so blown out of proportion that it got bigger and bigger than it actually was?

Were these reputable people – or what I had thought them to be – touting these events liars?  And if so why?  What were their gains?  Exposure?  Better traffic to their shows, blogs, podcasts?  Bigger revenue streams?  Or are these people the ones who actually saved our lives by warning us ahead of time so we could prepare?  I would really hate to think that all these in-the-know “people” and their work was all for naught.  I mean they are actually taking the time to “pull” all the pieces of the puzzle together for us, and I will admit I have been amazed at the details some have gathered to bring a lot of attention to different subjects that we may not otherwise have even known about.

In September 2015, no asteroid hit in the Atlantic Ocean, we did not experience a stock market crash the likes of 1929, the Government did not declare Martial Law, and none of the other “end of the world as we know it” scenarios unfolded – a good thing, a very good thing, indeed.  But what else was a good thing is, as a result of all this “hype” it motivated a lot of people to up-pick up the paces in their preparedness plans and to begin once again to start thinking ahead instead of falling back into a normalcy bias state of complacency.

Aren’t you more prepared, better supplied and your skills just a little more polished than before because of September 2015?  We, as preparedness-mined are preparing for an unknown event – which by the way is still out there.  I am personally thankful to all those “people” who take the time to help educate us by doing all the foot-work, which allows us then to cherry-pick what we choose to believe or not, and then do our own research.

What the September 2015 “hype” did was put a little fire under our feet and gave a lot of us the gentle nudging we needed to get better prepared for whatever that unknown “end of the world as we know it” when it comes.  So, bottom-line, nothing earthshattering happened in September, but that is not to say we are out of the woods by any stretch of the imagination.

We still live in an unstable world.

Thank you for sharing Survivor Jane to all of your friends!