Hard as a rock Bread - How to Make Hardtack Survival Bread

I was thinking the other day about how people would bake bread if they were "on the move' and didn't have access to a loaf of bread or even a piece of bread for that matter.

Well this got the better of me and I began to do a little research.

What I came up with is hard bread, also known as 'hardtack'. 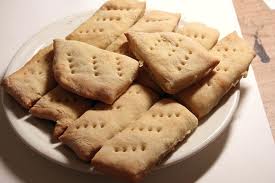 Yes hardtack, not that break-your-teeth-surgery-sweet candy that comes all stuck together in the brightly colored Christmas tin, but a floury biscuit of sorts.

Seems the concept of hardtack dates back to Egyptian times (maybe even earlier), and later was used on long sea voyages, for the military, eaten by explorers, prospectors, and pioneers.  Of course the name has changed down through the years but its basically the same.

Now, its not really a bread as much as it is a cracker. And, from what I have read no wonder we slather anything and everything on our crackers of today - this custom must have originated from the use of hardtack.

I have to say after investigating this a little morsel, it sounds like it was more of "something to put in your stomach" than a delicacy .   It was thought that because most medical issues were associated with digestion, hardtack was not only good for sustenance sake but to avoid illness as well.

It was idea for nutrition, easily portable due to its light weight and had a long shelf life.  Case in point, after the Civil War, hardtack was stored and the surplus used during the Spanish American war 35 years later!  Yummy!

The surprising thing is, hardtack is still made today, and in fact, Alaskans still eat it as part of their normal diet with melted butter, soup or moose stew (get used to it ladies - it may be possum or even rabbit stew for us!)

Hardtack is a significant energy food, with one 24 gram cracker containing 100 calories (20 percent from fat), 2 grams of protein and practically no fiber.  Add a little peanut butter, honey or topping of availability and you've got a survival meal!

Here's the good news. You can make hardtack yourself at home and begin storing it.  It's just made of flour and water!  That is the novelty of this cracker.  And, if kept dry, you can take it wherever because, like we've said, its light-weight and endures extreme of temperatures.

Here is a recipe I found to make hardtack, but there are any number of recipes you can find online to your liking:

Do not but any shortening or oil on your hands.

Roll out on a floured surface until about 1/8 inch thick (or there about).

Cut to squares or rectangles depending on your preference (say the size of a saltine or gram cracker example: 3 x 4 inches).

Make little holes in the hardtack like you see on crackers of today with a tined fork making sure the holes goes all the way through the dough.

Bake the hardtack at 325 for at least an hour, turning over once making sure it is cooked through completely.

The hardtack will still look pale when its done.

Note: Some people bake their hardtack at 300 for a couple of hours, just to get it real dry.

Now keep in mind hardtack got its name honesty. This stuff is hard.  To eat it you will need to dunk it in your beverage of choice, crumbled it into a soup or stew, or top it with a jelly, peanut butter, butter or other soft topping.