Sun and Artichoke = Survival Insulin for the Diabetic

Not sure about you, but when I hear someone mention artichokes, I envision myself in a fine dining establishment, white linens and china, a little candlelight as I pull those succulent morsels of warm artichoke leaves between my pearly whites.  Or, the warm scrupulous dip my sister whips up for those little girly get-togethers we have.  So when I read how valuable artichokes could be in a survival situation - I thought 'well now, isn't life grand'.

Jerusalem artichokes, it appears can be used for those who suffer from diabetes to

decrease or eliminate the need for medicinal insulin, which in a survival situation would be a god-sent in a time when insulin will be scarce or any at all.

Then, after reading more, I learn that this particular artichoke I’m speaking of is not the “good old artichoke” I am accustomed to.  It’s an easy enough mistake, I mean, it did have the word artichoke attached to it, and if you reason that there are a ba-gillion varieties of tomatoes out there, one would only conclude we were talking about a different variety of artichoke, wouldn't you?  But the Jerusalem artichoke is neither from Jerusalem nor an artichoke! (Why do they do that to us??)

The Jerusalem artichoke is North American native and is a variety of perennial sun flower!!!  So where the heck they got artichoke or Jerusalem for that matter, from a sun flowers beats me!  And it’s the root vegetable at that!

So I am going to refer to the Jerusalem artichoke as the Sunchoke.  The Sunchoke is the tuber bottom (the part under ground) of the sun flower, and kinda resembles a small potato or ginger root, that’s the part you eat.  The taste is like a turnip or water chestnuts, high in iron, calcium, riboflavin, vitamin B6, vitamin C, phosphorous and inulin. 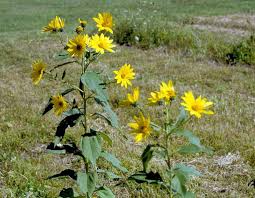 I may have been wrong on the artichoke part – details - but not on its benefits. If you're diabetic and have no means for insulin this just could be your survival salvation.

Isn’t it great how nature has a way of taking care of us?

So what are the benefits of the Sunchoke?  For those who have insulin resistant diabetes (Type 2), from what I understand their carbohydrates are stored as something called insulin.  Inulin (not insulin) found in Sunchokes is a fructose that the body breaks down slowly so blood sugar doesn't rapidly increase.  And, for those who are non-diabetic by eating Sunchokes, it can help relieve constipation, aid in weight loss or weight control, normalize metabolism, remove toxins from body, strengthen the immune system and, act as a tonic for cardiovascular system.

It would make good sense for any prepper to plant Sunchokes in your garden as they will survive a hard freeze (protected by a layer of soil or mulch) and long periods of drought.  Sunchokes can also be kept in a cold moist place for 2 to 5 months or left in the ground until needed; protect over-wintered with a layer of mulch.

Think of Sunchokes as health survival for our future survival. Just sayin'.