Beyond the Redwood Trees – The Bohemian Grove

Now I will admit my formative years were mostly taken up with visions of shoes, clothes, shiny bling, shoes, make-up and oh, did I mention shoes?  So, as my eyes were beginning to open to what some refer to as the real world, I couldn't help but be a little shocked (sometimes a lot shocked) at what I read and saw.

There are things that are going on in our own backyard that we haven’t a clue about.  One of these ‘things’ is a place called “The Bohemian Grove”.  Sounds cool huh?

I have to admit, there was a time when anything that had ‘club’ attached to had my name all over it. Unfortunately, the Bohemian Grove, whose members are affectionately referred to as “Bohos” or “Grovers” by some; is a no-girls-allowed club of over 2000 influential big names in world-power, with a lengthy waiting list.

I’m going to share a little of the information that is floating around about the Bohemian Grove.

First of all, the ‘club’ holds an annual meeting every July at The Bohemian Groves, a 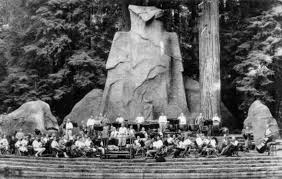 2700 acre retreat in the Redwood forest.   It is not camping as we know it for these 2000 rich and powerful guests, consisting of major military contractors, oil companies, banks, utilities and national media, but a time of listening to policy speeches and leisure pursuits of the world’s elite.

And, just in case you are thinking, ‘oh this must be some new finagled men club, its not.  The Bohemian Club was formed in … get this, 1872.

What I wondered was, how can a club like this be kept such a, well … eh, secret?

I mean they have this ritual, where they dress up in these red robes and burn an effigy, called the ‘Cremation of Care’, before a 40 foot …hang on … you’ll love this … owl.

I don’t know about you but I’d be embarrassed just saying I did something like that to someone.   An owl???  Really?

Can you imagine it?  “Oh, wise and powerful Moloch the Owl …” But then I guess it’s fitting for the Country’s most powerful who-who’s (get it? hoo-hoos like an owl) of the rich and elite huh?

Apparently, this is not just a play date for these men.  For two-weeks these powerful men do their “networking”.   Remember we are talking about men representing the government, military, industrial, and financial sectors of our Country most of whom make major policy decisions.

Some of the many guests of these “July retreats” are, every Republican president since Calvin Coolidge; former cabinet members Colin Powell, George Schultz and Henry Kissinger; former House Speaker Newt Gingrich; Dow Chemical Chairman Frank Popoff and industrialist Stephen David Bechtel, Leonard Firestone and David Rockefeller, who present and/or listen to speeches, known as ‘Lakeside Talks’ containing information not available to ‘the outside’.

And get this, just like the tribes on Survivor these guys have funny group/camp names too, like, Hill Billies, Mandalay, Cave Man,  Stowaway, Uplifters, Owls Nest, Hideaway and Isle of Aves, Lost Angels, Silverado Squatters, Sempervirens, and  Hillside to name a few.

So what’s the big deal about this secret July gathering? That is becoming more and more not so secret? Well for me, is that our Country’s leaders and power-houses are meeting with world leaders in secret?  Not sure if that's a good thing. Just sayin'.