Okay, now this has always amazed me, and frankly most of us have witnessed this through the media it time and time again after a disaster … people WAITING to be rescued, helped, or aided by government officials.

Just look at what happened with the Hurricane Katrina disaster - remember that?  The natural disaster that became a man-made disaster in fast order.

I know, I know, I seem to use the Katrina example a lot, but geeze, who hasn’t seen it at least once 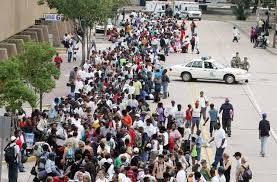 on media coverage or in a magazine the devastation?  People with misplaced logic carrying stolen items over their heads while wading in chest deep water, hordes in mass exodus trudging down the interstate with whatever they could muster to bring with them, people sitting on their roof tops waving frantically at the overhead helicopters, crowds hunkered on cots shoulder-to-shoulder - all visions that we can recall instantly.

Unfortunately, here are going to be hours, days and weeks before we might see assistance after a disaster – and in some instances – not at all.  We forget there is a chain of command for personnel – whether it be local, state or federal governments. Huh? Okay, simply put … everyone has a boss that they have to answer to before an action can take place – so if they are not given a command they don’t respond.

And sometimes it’s not the government’s fault for the delay in aid, but some over zealous citizens who wants to take matters into their own hands and adopt the “what’s mine is mine and what’s yours is mine” mindset, and subsequently taking the needed attention of the responders from the people in real need of assistance to combating "bad guys".

Disasters are NOT pretty.  There are so many variables in what could happen and the delays that may be created by these variables. Let’s take the Katrina disaster again.  The residence of Louisiana KNEW the storm was coming right?  They knew it was a whopper of a hurricane, right?  But some chose to stay put and wait it out, instead resting or their laurels that they had weather storms in the past, and this one would be no exception. And, the government knew it might be bad, but because they had never encountered a disaster of this magnitude didn’t realized just how “bad” it became.

The problem with anyone "resting on their laurels" (i.e, being so satisfied with your own past achievements that you make no effort to improve), is that at some point and time you're going to have to get off those laurels and be accountable for your actions, either by your own doing or by the forces of nature.

So what’s the point in all of this?  The point is, the government may not be able, ready, available or have the resources to to help you in the time of a disaster.

Think about it, if just some of you would prepare yourselves, imagine how much pressure could be taken off the responders’ shoulders.  Water lines, food lines, first-aid, all of these and more could be minimized by just you having your own supplies.

Sure, you are right there will come a time when your supplies will run out.  But in the initial panic you can avoid being one of the hundreds maybe thousands standing in line simply to get ‘a’ bottle of water. 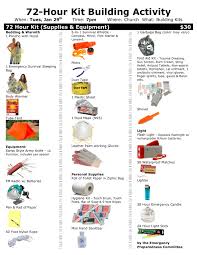 Three days (72 hours) is what is recommended.  From the disasters I’ve seen lately, I would count on more like three weeks to three months of supplies for a disaster.

Learn to minimize your life style so it isn’t such a shock when things turn bad.  For those who are used to dining out for your meals or pushing the vending machine every time your little tummy pinches - you are going to suffer the most.  Instant gratification and disasters do not mix.

Start with small steps like preparing soup and homemade sandwiches to eat at work and home instead of going out.

If you survive a disaster physically unscathed, count yourself blessed.  It just doesn’t seem fair that the injured should have to wait while a responder tends to your need for water.

Oh, and if you really want a character strengthener try eating some of those weenies in a can.  Me?  I’ll pass.