The Microburst - The Inside-out Tornado: One of Nature’s Most Dangerous Wind Storms

We live on a beautiful homestead overlooking luscious green mountains covered with huge red and white oaks; and peppered intermittently with big strapping pine trees. There’s just something comforting about living amongst the trees, tall, strong; with a cooling-shaded canopy and, the security afforded by the outreach of their long twisted limbs.  Nature’s own fortress.

I had always considered us safe from Mother Nature’s wrath simply by virtue of living on a granite foundation surrounded with trees standing tall like sentries ever vigilant for any dangers that might be lurking just outside our perimeter.  But my sense of security was shattered one evening by something I had never heard of before … let alone experience.

Our weather radio; programmed to all surrounding counties to let us know what direction any bad weather may be coming from, had just broadcasted an approaching severe thunderstorm with high gusty winds and hail.  Now, thunderstorm warnings in and of themselves in WNC were not uncommon in the summertime, and usually just meant we needed to get the animals back in the barn.   As the dark clouds rolled in and evening fell, my husband went out to corral the animals into the barn. The rain and wind began to come down – when suddenly they increased in intensity as my husband walked back into the house.  As he entered, something happened that I had never seen before - let me first preface this with the fact that we do not have central air so our summer cooling comes from open windows – the rain began to pour straight in through the open windows all at once; north, south, east and west … all at the same time!  Then there was this unnerving wind noise that made both my husband and I know immediately to seek safer shelter - as the power went out.  The wind sound only lasted a few minutes and then it was gone leaving an eerie silence as it continued to rain outside.  Because of the power outage and the continued storm we stayed put throughout the night. 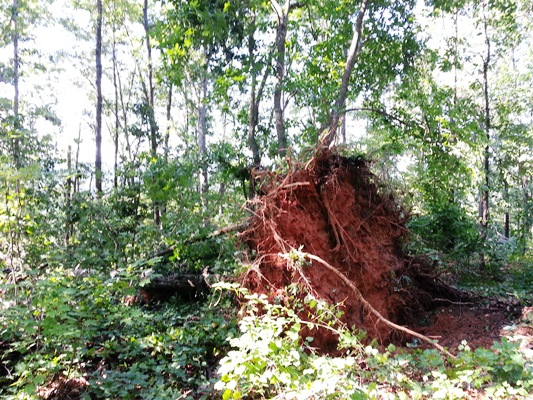 The next morning we awoke to the surreal image of hundreds of trees down all around our house. As we went outside, we could see huge oaks cracked in half; yes I said in half, others uprooted and lying like wounded soldiers next to one another with their giant saucer-like root bases spanning fifteen feet across or more, and tall spindly pine trees that had hooked onto others dragging them down with such force that they looked like dropped matchsticks. 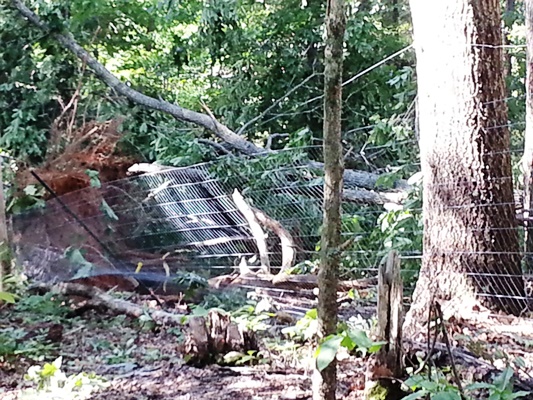 As we walked the property we could see a pattern emerging with the fallen trees.  It was like something huge was dropped down from above creating an outwards force of a mile or more in circumference – our home thankfully was not the bullseye.  What we later learned was we had experienced a microburst, or downburst – a sudden downward burst of wind from the base of a thunderstorm.  The air rushes down with speeds up to 60 mph before slamming into the ground and going out in all directions - at times reaching 100 mph causing extensive damage in its path in all directions - in a matter of seconds or minutes.

According to National Weather Service (NWS) a microburst is a column of sinking air inside of a thunderstorm – think water balloon – when the “balloon” of air drops down and hits the ground, the force of air is sent out in all directions; usually no more than 2.5 miles in diameter.

Now for the technical part, there are two types of microbursts, wet and dry – or rain and wind.  What we experienced at our homestead was a wet microburst, which began with the thunderstorm and water droplets (rain) and/or hailstones that were held up in the center of the thunderstorm by an updraft. The updraft was so strong that it was able to hold a large amount of rain droplets and hailstones.  Then, when the updraft could no longer hold the large amount of rain and/or hail, it dropped it to the ground spreading out in all directions – remember the water balloon – with wind speeds reaching upwards of 100 mph, or higher; - the equivalent to an EF-1 tornado.

So, why I am even telling you about our microburst?  Well, first of all, because with most severe thunderstorm warnings there is always the potential for a microburst (who knew?)   But, because the lead time warning for microbursts can be very short, or in our case, no warning at all, they can come as a surprise.  And, secondly, like me, you may have never heard of a microburst, even though they are actually more common than tornados.  Yep. For every one tornado there are 10 microbursts!  In fact, many assume a tornado has struck when it was actually a microburst.  Both have damaging winds and a loud roar sound (that unnerving noise I heard.)

My suggestion to you, as we do now, is take heed when you heard severe thunderstorm warnings; especially if they are associated with hail and wind gusts.  You never know when those beautiful trees on your property could be turned into objects of death and destruction in a split second.