I Am Never Target Shooting Again! 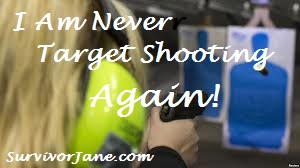 I attended a pistol shooting training session - six hours’ worth in fact, at an IDPA sanctioned range a while back. At the time, I didn't have the faintest idea what IDPA stood for and, to me all gun ranges kinda looked pretty much the same. When I got to this range however, what I saw was a pretty cool setup. Sure, I had seen the set-up on the range’s website and thought it would be a lot more fun than just standing in one spot, adjusting my position for a few minutes and then shooting at the same target over and over – until my ammo ran out, or someone else was antsy to have a turn.

Although the range hosted IDPA matches, my group was there for some intense self-defense pistol training by the range instructors. The course included law enforcement caliber video simulation training, hands-on training, how to shoot in less than 1 second using quarter increments, how to clear a building while live firing at targets, how to shoot from a vehicle while live firing at targets, and distance training at targets while moving. The main emphasis was on firing your weapon in stressful situations.
Not knowing what IDPA was initially, I just thought that the range had taken some creative liberties with their range target placements to make shooting more fun. Yes and no. It was fun, but more importantly, the range targets were placed in such a way that they emphasized the importance of moving and shooting under pressure. And, it was stressful. Scenarios were set up where your life would depend on the proficiency of your shooting.

When I said that I would never target shoot again what I meant was that with most traditional shooting ranges you stand in a certain spot, you raise your arms out stretched; holding your weapon firmly, you close one eye and look down the sights. You then aim, and aim some more, shift your feet and body, and then aim some more. When you think you have your sights lined up to where you want the bullet to land on the target (usually some sort of concentric circle that puts the focus on the bulls-eye), you pull the trigger, feel the recoil, and hope you hit at least something on the down range target. All of this is all well and good if that is what your focus is - target practicing - without movement, stress and pressure (well maybe a little stress.) But, this is not defensive shooting.
For me the only reason I have a firearm is for the defense of my home, property, family, and me. Think about it. In a high pressure, life-threatening situation (usually at close quarters mind you), your target is not going to stand there for you while you get your feet planted, get your sights aligned, and then with body shaking try to fire your weapon. All of these steps take way too much valuable time.
Most of us figure that because we have our CCW permit, and carry our weapon on our person that we are ready to respond to a threat. What this training showed me is that kind of thinking is way off. Sure, it is stressful firing a handgun, heck any weapon for that matter, but when we do, it is usually in a safe non-threatening environment – and our targets, and us are stationary.
What I learned and now practice from my training is quarter second step draws. One quarter second to un-holster your weapon, one quarter second to chamber your weapon, one quarter second to raise your weapon, and one quarter second to fire your weapon. A total of one second. One. Oh yeah and while keeping both eyes open. Sounds easy enough, right? Now add in that stress I was talking about earlier. The way I practice this drill is by dry firing my weapon. I unload and clear my gun and then randomly aim at set points around the house. (Caveat: always treat your weapon as though it were loaded. Keep it down in resting position when not aiming with your finger off the trigger; never point your weapon at something you could destroy or someone. Oh, and check with your owner’s manual to see if dry firing is acceptable to do with your weapon beforehand.) Dry firing helps you hardwire your mind’s muscle memory to moving, aiming, pulling the trigger and shooting. 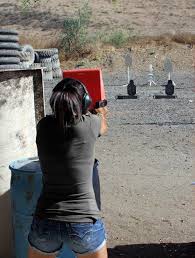 I also learned to clear a whole house (not just a room) and shoot bad people targets while doing it (trying to avoiding the civilian targets.) Notice I said targets? No one was actually shooting back at me and there was still pressure! I also learned how to shoot from inside a vehicle, get out of the vehicle while still shooting, and cover myself while reloading and shooting more bad people targets around the vehicle. Talk about an adrenalin rush! And this was all while live firing. (I also practice my room clearing at home using dry firing.)

So what is IDPA? Well, it stands for International Defensive Pistol Association. Their website (idpa.com) states that IDPA is a shooting sport that simulates self-defense scenarios and real life encounters. Some of the things you will learn is:
Techniques to Improve your Speed and Accuracy
Scenario / Stage Strategy
Drawing from Concealment
Shooting on the Move
Use of Cover in IDPA
Engaging Reactive Targets
Emergency Reloads
Tactical Reloads

I would highly suggest you look into your local or regional IDPA and see the schedule for their matches. I know the word “match” may sound a little intimidating and out of your league, but you would be wrong. IDPA’s focus is toward the new or average shooter, with the main goal of testing skills and ability – not equipment or competitiveness. Everyone is there to learn and have fun while shooting. There are safety officials around at all times, and with you while firing, so it is all good.
IDPA, or defensive shooting, will get you in the mental mindset you need to protect yourself, home, and property with confidence in a life-threatening scenario, something standing and shooting at a target just can’t do. – Just sayin’.