I’m writing this article; painful as it may be both physically and mentally, as a reminder as to just how fast something can happen.

I decided to dehydrate some sweet potatoes and broccoli, so I pulled out my newly washed and newly purchased mandolin slicer – ‘newly’ as in never used before. Funny, in a weird sort of way, how you get in your mind that if you’ve used an item before, they must all work the same.  Not so.

The mandolin I had been using for years actually sits atop a bowl so that what you are slicing falls into the bowl. This mandolin you held with one hand and sliced downward with the other hand – no stand (should have been my first clue *sigh*) The reason I purchased the mandolin – was my old one was only two-inches wide and this new one was three-inches for larger items.)

Holding the mandolin with my left I took a sweet potato and began slicing. I didn't use the finger guard because my fingers were away from the blade. Or so I thought. I was about three slices in when it happened - that awful gut realization that you’ve cut yourself. My thumb was bleeding profusely.  The mandolin dropped from my hand as I immediately turned to the kitchen sink to put my thumb under cold water to stop the cut from bleeding. Only it wouldn’t stop.  So, I took my left hand and wrapped it around my right thumb and held it tightly as I raised both hands above my head ( I’m kinda a pro at this as it seems I’m always getting a nick  here or there with kitchen knives.). Still the bleeding persisted.

I knew from past experiences that sometimes it takes a while for the clotting process so I didn’t panic; just continued to walk around with my two hands in the air above my head.  The blood was now flowing down my arm. “Not good” I thought.

Now why I’m not sure, as I didn’t actually ‘look’ at the cut when washing it off, I glanced over to the kitchen counter where I had been working. There as pretty as can be was the side of my thumb – literally – sitting on the counter; from above the knuckle to the top of the thumb; across the nail bed.

I grabbed the “pieces-part” of my thumb, put it in a baggie with milk (I’ve since learned that you put a knocked out tooth in milk – not appendages), put the baggie in a cup of ice, called the emergency room to let them know I was heading their way – half-thumbed; so they would be expecting me, and had someone drive me to the emergency room 35 minutes away.

When I got to the emergency room, I was treated more like a novelty than a patient.  Hospital staff that had never ‘seen’ a mandolin injury were eager to come and visit – not me – my injury.  I could overhear lots of undistinguishable chatter outside the room I was assigned to as the parade of scrub-uniform clad personnel paraded in and out of the room with comments such as ‘wow that’s down to the muscle’, or ‘I didn’t realize those things could cut that deep’.

Getting a little frustrated by it all – after all nothing had been done yet after an hour or two– I asked if they were “guessing” as to how to proceed.  They quickly slowed the flow of ‘visitors’ and began to actually focus on the injury.  All in all, the beloved wayward thumb piece – could not be attached, as “they no longer ‘do that’ (another *sigh*).  A mesh dressing was placed around the thumb, it was wrapped with gauze to five times its sized, a prescription given for pain and antibiotics and instructions to return the next day to check the wound. 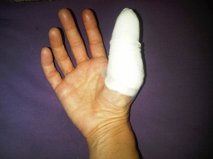 The next day was worse. After answering the same questions I answered not more than 24 hours earlier, I was ushered into an examining room. The dressing for some reason wasn’t coming off easily, so they had me hold the dressing under warm water. Then, a soak in warm water and peroxide. Nothing. Then the nurse, a little perturbed because of the time it was taking for the dressing removal told me I would just have to ‘bite the bullet’ and remove it. The problem was – and what the nurse didn’t realize, it was stuck. The mesh had adhered deep into the wound.  The long and short of it; it took two hours to remove the dressing after a final remedy of Novocain.

The thumb is doing great by the way. I have been treating it with pure honey and it is amazing how well it’s healing. (Make a note to have honey around not just for eating but for its healing properties as well.)

So why share this? Simple. This could have happened in a survival situation.

The lesson I’ve learned and hopefully you won’t have to?

It is – don’t take short cuts. I was so focused on the wideness of this mandolin that I didn’t even notice it didn’t have a stand included. But …, I did notice it before I started using it and still tried to use it.

The good news? I only have a part of a thumb nail to polish! Quicker drying time *wink*.