If you will recall from my “Sneak Peek Review” of the first seven chapters of Author, Richard Stephenson’s new Prepper Fiction Novel ‘Collapse’ (a dystopian novel about the future downfall of America) the storyline twists and turns around three main characters; Howard Beck, Richard Dupree and Maxwell Harris with accounts of terrorist attacks, prison camps and yes … an American and global collapse.

As a refresher, Howard Beck; born with Asperger’s Syndrome, is the self-centered ba-gillionaire (or shall I say the riches man in the world), who founded Beck Enterprises; and, created and designed the first Artificial Intelligence computer. He lives a near reclusive self-lifestyle in his $500 million dollar home, nestled in the foothills of the Rocky Mountains, in Colorado. 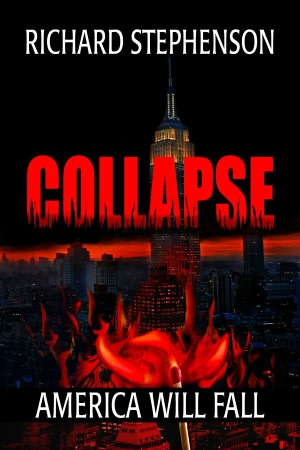 Richard Dupree, an ex-Navy SEAL turned convict; now has four year of his twenty-five year sentence under his belt at Highland Valley State Prison; said to be one of the most secure prisons in the Country, located in the hot mountainous terrains of California. Richard has become a reluctant recruit of a notorious white-supremacy gang at the invitation (sort of) of his cellmate Tank, which he is totally and morally is against.

And, lastly but not least, Maxwell Harris, a man who strives to do as little as possible and still get paid as the Chief of Police for a small suburban town outside of Houston Texas. Married, with a child on the way, he secretly harbors an addiction for pain-killers for an unknown condition, which to me just screams dysfunction - addiction and authority.

If you will recall the story takes place 15 years in the future. The year is 2027, and the United States is in the midst of a Second Great Depression where people are reliant on mass transit or two-wheeled vehicles as their modes of transportation; no longer being able to afford gas for their vehicles.

Also, Texas and Louisiana are preparing for Hurricane Maxine, a fierce evolving storm. The population of Florida is struggling from the mass destruction and devastation caused by Hurricane Luther that struck one month prior; including a massive chemical spill down the gulf coast. On the other side of the Country California is battling wildfires.

As I mentioned in the beginning, the author’s storyline twists and turns; waxing and waning the text in and around three of the most unlikely bedfellows who while struggling for their own survival find themselves thrust together for survival; sprinkling the personalities and issues of sub-characters like jimmies on a cupcake.

The book is tailored for both a female and male audience with lots of “guy stuff” peppered with the “socialness” that we preparedness-girls seek.  I will say I did cringe a lot with the “white-supremacy” language – and no not because I am a fuddy-duddy – it’s just not language I'm accoustom to hearing, but understand the rational behind it for the development of the character.

Although written as fiction, the scary reality is that ‘Collapse’ can and quite possibly will become a reality in the not so distant future if we don’t change our ways of doing things. Its just that in my opinion, what is being done is not working.  You can’t help, as you read the book reflect on the headlines of current newspapers and stories on the TV news and wonder.

In conclusion, the ending of the book is well, not so farfetched.  I mean, asked conspiracy theorist about the Kennedy assassinations. Just sayin’. The author also leaves a lot of open ended questions at the end of the book in my mind.

One of which is … will there be a sequel?

Get your copy of "Collapse" here: Collapse